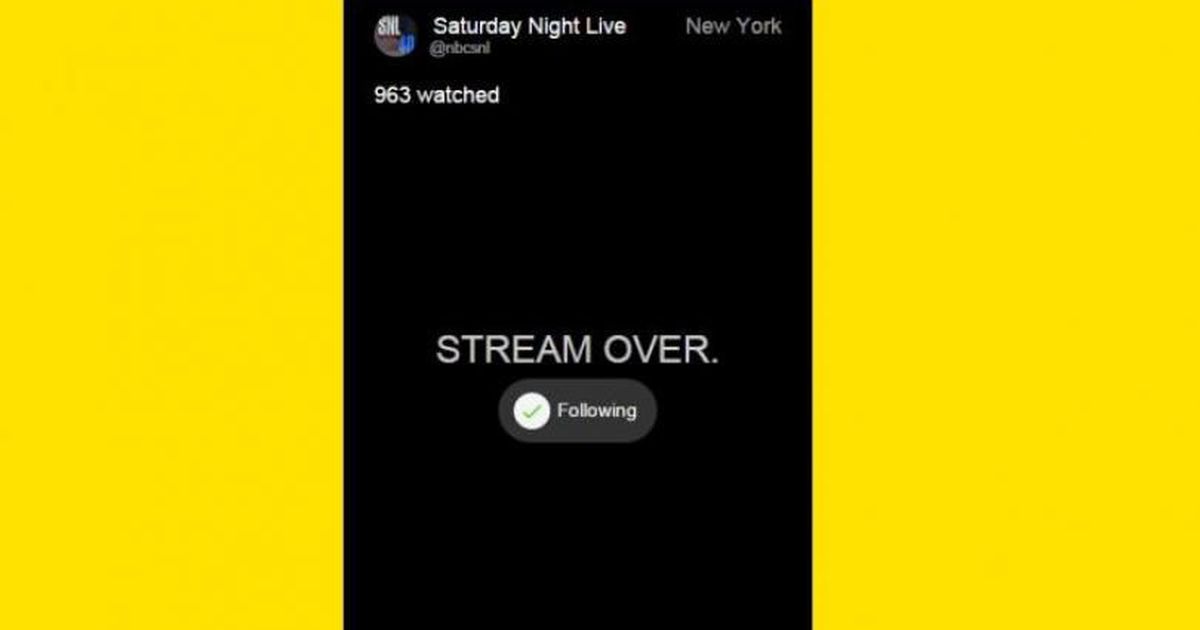 Meerkat, a livestreaming app, was removed from the app stores last week.

Meerkat is dead. The mobile app that ignited a live-steaming revolution when it made its debut at South by Southwest 2015 was removed from the iOS and Android app stores Friday.

Its funeral has been long awaited as the app battled for attention with Twitter’s Periscope and Facebook Live. Meerkat founder and CEO Ben Rubin announced a pivot for his company back in March and released his latest project, Houseparty, an app for group video calls, last week.

But the community that Meerkat helped build is alive and well. Mashable asked 14 of the earliest users and some of the most-followed app personalities why they used Meerkat and how it influenced their lives. They told us in their own words:

Meerkat was an amazing platform for connecting with people around the world. It was the first time that a social network felt real in creating friendships and getting to know people.

There’s friends I made through Meerkat that I still have today. Meerkat was a close knit community that supported each other. I’m blessed to have amassed over 100,000 followers on the platform, which helped in getting me comfortable in front of the camera, which led to me launching my own YouTube channel.

When Meerkat was at its peak it was definitely the most fun social media experience I ever had. From celebrating birthdays and engagements to even watching people sky dive. Meerkat invited me into people’s lives. Sad that it’s over, but the friendships remain!

Meerkat ushered in a new era of livestreaming. Their focus on equipping users with tools and features to foster a two-way, participatory environment was second to none. With far fewer resources than Periscope/FB Live, they managed to ship meaningful updates to their product at an alarming rate.

Meerkats early focus on community (and that early community was incredibly unique!) was their special sauce. They were fortunate to have an exceptional community manager, Niv Dror (currently at Product Hunt), on their team. Unfortunately, after Nivs departure, Meerkat lost their community focus and instead opted to chase Hollywood/celebrities. That, ultimately, is what led to their demise.

Few of my most memorable Meerkat streams pic.twitter.com/tWGFuBfMr4

When asked to describe what it was I loved about Meerkat, so many streams, events, and meet ups came to mind. One particular stream that stuck out was the time I visited the Meerkat HQ and got lost in the streets of San Francisco. Fortunately, I was streaming and walking, albeit in circles, and my viewers came to the rescue. They went over to Dave Grossblatt’s stream, another frequent Meerkater who specialized in showing viewers around SF, and told him where I was. That day turned into such an adventure! I started my morning on a mission to get coffee, got lost, met Dave (and got coffee), and then spent the rest of the afternoon hanging out with my new friend while he gave me a tour of San Francisco’s charms.

That stream is the perfect representation for why I love Meerkat so much and will forever be grateful for what the app gave me. For me it was always about these amazing interactions I was having with viewers from all around the world. They could tune into whatever escapades I was up to and tell me stories of their own, give recommendations, or just tell me they liked my smile which made my day! So for my friends at Meerkat, thank you guys for what you created. It changed my life in such an amazing way and there will always be a part of me that’s still the #MeerkatQueen

From the first moment of my first stream, I was hooked. The ease and simplicity of the interface, the cute animated Meerkat when it was trying to connect, everything just felt right. I started streaming during SXSW, and to everyone there it seemed like something truly transformative was taking place. The idea of an interactive window into someone else’s world was intoxicating.

Niv, who watched over the Meerkat community, made the whole thing feel like a family. Those months were, without question, the best time Ive ever had on the Internet with any social network, app, community or product. I felt that it was inevitable that Meerkat was going to take over the world. The wide open feeling of broadcasting with random folks anywhere in the world and finding some kind of connection, I truly feel is the best of what the Internet is capable of achieving, and to this day I dont think anyone has done it quite as well as Meerkat did.

founder of Summit.Live and creative strategist

Meerkat began beautifully at SXSW and helped start a large movement in disruptive media that were still catching up to. We look at Facebook and Periscope now and see them just beginning to do some of the things that Meerkat did a year ago. Saying farewell to Meerkat is strange because it may have died from moving too fast.

Goodbye to something amazing that was a catalyst and an amplifier. As the space grows and matures I often feel as though the innovations that Meerkat seemed to aim towards would have been welcome now. It was truly ahead of its time.

Meerkat started the live video revolution. It was the first time I felt I could experience SXSW in real time without being there and made me excited for the future of video. As one of the first people in the PR & social media community to use Meerkat, I saw it not only as a fun app, but a tool crafted for storytelling in an authentic, immediate and raw way. Thank you Meerkat for starting it all.

Meerkat day’s may be over, but the impact it had on me still lingers on. Because the platform was my training ground to be where I am today. Thank you and may you RIP Meerkat.

I wasn’t a video blogger, I’m not someone that loves to consume video, the concept of live streaming wasn’t something I thought would have valuable for me and my business. That all changed thanks to a fuzzy little animal that lived in my phone that created a community, that bled yellow and transformed my business my passion, my belief in the power of community.

For many Meerkat created the mobile live streaming buzz at SXSW, that is now dominated by Facebook and Twitter. For me I believe Meerkat did far more than pioneer this new way of having conversations with your community via video. It gave early adopters social media power users and many they didn’t feel that they could get their voice heard a community, a platform and ultimately friends around the world.

A year at #meerkat change it all for me at #SXSW
Rocking the vintage throwback today at #SXSWi brings back so many pic.twitter.com/EWVxtIoX3r

As one of the first users of Meerkat, it was one of those platforms that instantly changed the game for me. The community of friends that I was able to make is beyond anything I’ve ever seen on social media. Digital avatars turned into live talking faces.

One of my favorite memories was the epic 7 hour karaoke live stream that helped launch my love for live video: “At 9:00 on a Saturday evening, the crowd shuffled in, there was my phone in front of me with people telling me what to sing!” That little live-stream launched me into another level and have since had live video projects with Barilla Pasta, Edelman Digital, Tinder, DC United, numerous events and conferences and a 1 Billion impression campaign with Applebees and BTC Revolutions. All of this happened because of Meerkat.

Meerkat created an environment that inspired connections worldwide through unprecedented authenticity. While the app itself may be gone, many of us continue to cherish the genuine friendships made last summer.

What I enjoyed most was the connection the users had with the creators of the app. Ben Rubin and his team were the best example of how a company should listen to their users and give them what they want. The transparency with users as they improved the platform was another important part of what I loved Meerkat. They were always letting users know when features were coming, and what they were. No secrecy around where the app was going. Every user felt like they had the founders attention and would be heard.

VP of social media at Mastercard

Meerkat changed everything. It wasn’t just an app; it was a community. Meerkat didn’t just turn our phones into live streaming devices they turned our phones into ways to make new friends and build a unique community of people who supported each other’s content.

The excitement after the launch and each time a new feature came out was something I’ve never experienced before. For me, it felt like the digital-nerd version of when the Beatles came to the US in the 1960s. Meerkat mattered. It stood for something. It brought people together. The Meerkat brand was strong. The people behind it were approachable and truly cared about the community. And the community cared about each other. Some of the people I interact with most on other platforms now are people I met on Meerkat.

I will never forget the experience of opening Meerkat for the first time. In a sea of highly curated, overly-photoshopped social platforms, Meerkat was an instant standout. The raw nature of participatory, live video attracted a different kind of communityone in which mistakes were a celebrated and key to its allure.

It was a powerful experience to have in your hands a tool which allowed you to travel to places you would likely never have gone and engage real-time with people you would have never met otherwise. For the countless hours I spent streaming, what I received in return from viewers can never be measured. It is a real gift to be a part of this community. I put it this way because even though our favorite little animal is gone from the App Store, the community founded by Meerkat is still flourishing.

writer, director and creator of PlayShorts and Vampire Mob

Meerkat was the place where I met friends I still speak to daily, some of whom have crashed on my couch. It’s also where I self diagnosed my resting b**** face. Life changer!